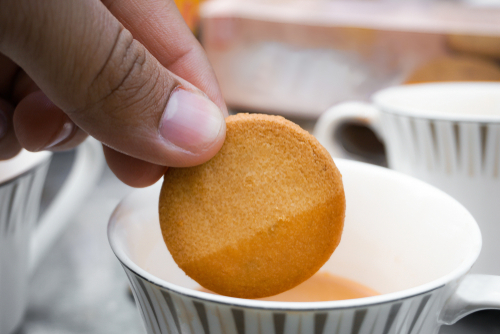 What is it with dunking biscuits that used to infuriate our parents? Didn’t they secretly do it ? Did they think it wasn’t “proper” to dunk biscuits in public? Well I now know it is not rude to dunk your biscuit in front of others as long as you do it properly.

It is all about technique

Apparently mechanical engineers have devised a technique for dunking biscuits in hot tea that ensures the biscuit does not end up at the bottom of the cup.

According to a mathematical formula, the best dunking is done with a full cup at a shallow enough angle to ensure the top surface of the biscuit remains as dry as possible. That makes sense. Who wants to burn their fingers in their tea while dunking biscuits? Besides if the whole biscuit goes in you are in trouble. The biscuit should be dunked in tea long enough to become moist and soft but not too soggy it drops off. Now that is not dunking, it is soaking!

So here is a simples process..

If at any stage the biscuit falls in the cup – you obviously need more practice.

My personal preference for dunking is a gingernut biscuit, well several actually. After dunking the ginger flavour sends tingles across my tongue, far more than if I ate the biscuit dry. Truth is I wouldn’t have the biscuits if not dunked as they are too hard for my teeth! As a child I actually thought that WAS the reason adults dunked their biscuits – their false teeth couldn’t cope.

What type of biscuits to dunk

Chocolate Chip biscuits are delicious when dunked. The heat from the tea melts the chocolate just slightly but enough to blend it into the biscuit mix. It is hard to stop at just one or two.

Malt biscuits are also enhanced by dunking but as they are softer they require more care and practice. This is to avoid the dreadful mess of a mushy biscuit which falls into the cup of tea.

For special occasions or if in Italy you may have Almond Biscotti. Now they definitely are for dunking. Probably more likely in a dessert wine. Who can possibly argue whatever you are drinking. They are hard to bite so they must be for dunking.

The Australians have a very popular biscuit, Tim Tams, which are for the Tim Tam Slam Dunk.

As you may have already noticed, it is not just about sticking a biscuit into a hot drink until it gets soggy. Dunking is pure art and the thing that separates a cup of tea from other beverages. You can add value to your enjoyment of any biscuit or tea by dunking. Just be sure to learn the technique for each biscuit. They are all different.

This is one of the many reasons I love tea. It is so versatile. Read more reasons

Do you agree – Dunking is an art?

Visitors are welcome – so long as they leave

What I Love About Tea

Child of the light – who is Tama