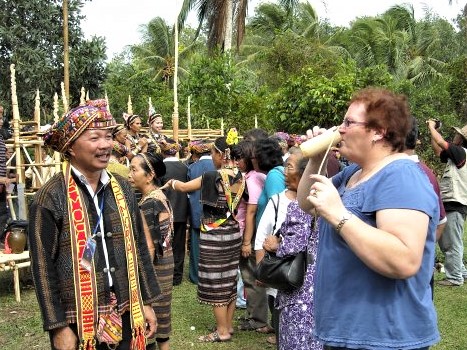 Many years ago my late husband and I had a short trip to Sabah. This is a Malaysian State occupying the northern part of Borneo. We flew into Kota Kinabulu, the capital, with little knowledge about the area.

Most tourists are keen to dive and snorkel in the beautiful waters or climb Mt Kinabulu.

I tried to organise things of great interest to him as being a tourist was not to his liking. These are not necessarily what other tourists would look for. As a farmer I knew his interest was more in something to do with the land so we went to a tour office to get their recommendations. They recommended some very appropriate trips and we set off on two days of driving with our own guide driven car to explore the northern tip of Borneo.

Sarje was an educated man, similar age to us, with a background in timber milling and agriculture who was now a tour guide. Perfect!

As we travelled up the state of Sabah we stopped at many locations to observe farming operations on hillsides. It showed the incredible stamina of the people of Sabah. There was no modern machinery to help them out.

They had to make a living and feed their family from about 15 acres of allocated land.

Towards sunset we took a river safari in a small boat to look for some of the famous proboscis monkeys. They are known as the Playboy Monkey as they seem to have a permanent erection. They come out to the river edge early evening for food and water. We spotted them on the branches but, apparently, we were very lucky to see so many as it isn’t always that way for tourists especially when looking for them in their natural habitat.

Mount Kinabulu appealed to many

We were in the Mt Kinabulu area but we didn’t have the 3 days required for the walk to the top. Neither did we probably have the fitness. There were hundreds of people already on the trek or preparing to leave the visitor centre. However, we did the walk along the canopy in the rainforest on the ridge of Mt Kinabulu. That was spectacular so can only imagine what the views are like if you do the Mountain climb. Mind you the swinging bridges were rather scary and quite long! Not to my liking.

The Rungus people and their Gongs

The highlight though was the visit to the home of the Rungus people. One of the most important musical instruments in Sabah is the gong. It features in many cultural festivities and traditional ceremonies of Rungus and other major ethnic groups of Sabah. The gongs are made at the Kampung Sumangkap Gong Making Factory in Kudat by the Rungus people. Gong making skills are handed down the generations.

While we were in the village they were preparing for some Rice Harvest Festival activities. Fortunately, we were invited to stay and join them celebrating the opening of the season’s Rice Wine. Five villages came together for the rice wine celebration. Each village built their own stage to place their wine vats. Once complete they all marched in procession to their stage and stood for photos and singing before the drinking started in earnest. We were offered a taste of the first of the season’s wine. It was drunk from a bamboo container and tasted rather nice.

Pigs and chickens were sacrificed as part of the ceremony. They were cooked over fires ready for a feast later in the day and the sound of them squealing was a bit disconcerting but the concept of a tasty dinner appealed!

Celebrations continued long into the night

Afterwards, they moved inside for dancing and singing but we were unable to stay for this as we had other places to see. There was only one other tourist couple there to witness this festival. The Rungus people made us all feel very welcome. This was the real thing, not set up as a tourist attraction. We were in the right place at the right time.

For more on Sabah

Pictured below: the Rungus women toasting the harvest; one of the village groups; the Rafflesia – a variety of the biggest flower in the world – found in parts of Sabah.

visitors are welcome – so long as they leave 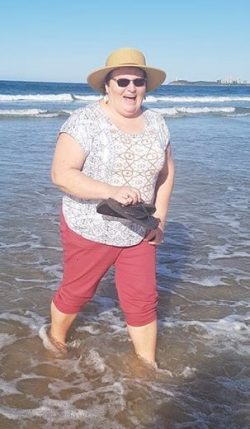 HI, I'm Dianne and welcome to my site. My partner, Tama, and I moved to the Sunshine Coast, Queensland, Australia four years ago from beautiful New Zealand. We have settled into a different lifestyle here. During a stint working in Singapore I developed a love of tea and recently became a qualified Australian Tea Master. I am also interested in travel, spirituality, cooking, finding experiences that may be a little different.