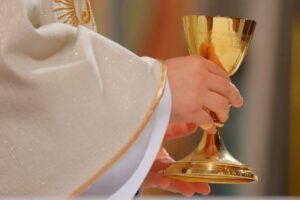 The recently announced changes to Church Law by the Pope to allow women to do a few more things got me thinking. There is room for change in many areas of the church.

When  I participated in the Seven Sacraments of the Catholic Church it often stretched the rules of the church and my family. The Seven   Sacraments of Catholicism are – Baptism, Confession/Reconciliation, Holy Communion/Eucharist, Confirmation, Holy Matrimony/Marriage, Last rites/Annointing of the sick, Holy Orders/Ordination. They are supposedly means by which God shows His grace and helps us achieve salvation. https://www.personalcreations.com/blog/seven-sacraments

My experiences of the sacrament with my two  sons were different. When the eldest arrived our Parish Priest was an objectionable elderly German man who was tolerated by parishioners purely because that was the correct thing to do in a church community. He was not welcome in many homes.  We did not like the thought of him carrying out the baptism of our first child. So, as my former Parish Priest had been our marriage celebrant we asked him to baptize our first born. To do this he had to do in h it in his church as he wouldn’t step on toes so to speak.  This was duly done on the way home from the hospital. A somewhat covert operation, but it was done.

By the time my second son came along we had an amiable Parish Priest. At this time things like Mass were being held in people’s homes as well as in the Church. As I was often “different” our son was baptized in a small ceremony in our lounge. The Priest went along with my plan but did mention the purpose of the Baptism was to welcome the child into the Church family.  Oh well I did it my way.

Confession was required about every two or three weeks. Any longer than that and you were scolded by the nuns at school.  If you missed confession you should not have been receiving Communion.  It was unpleasant for a seven year old explaining you hadn’t been to confession so couldn’t go.  Although, at that time you had to fast from midnight in order to receive Communion at the morning Mass. So if you inadvertently ate a piece of toast or biscuit you were struck off the eligible list.  That excuse worked some Mondays when questioned by the Nuns in assembly lines but not worth trying too often. I digress.

As a child I wasn’t sure I had anything to confess so couldn’t see the point in going to confession. I admit that like many others I made up things I thought were breaking the rules so I had something to confess. For example I would say I had lied to my parents or had been mean to my sister. I not sure where the last one fitted in the commandments but it sounded ok to me.  Other kids said they told similar stories. Of course I didn’t confess to the “real” sins of pinching chocolate from the grocery shop or breaking into my brother’s money box!!  In return for confessing some “sins” I was absolved by the priest and given some penance such as recite three Hail Marys and then I was fit to carry on being a good Catholic again.

I think some changes to Church Law would be welcomed by all young kids.

I wasn’t sure I would make it to the altar for my First Communion  as I had trouble at the practice sessions swallowing the “host” or “bread” without touching it in my mouth. If you ever had one of these dry pieces of wafer you will know how hard it was to swallow it without touching it with your tongue or teeth. I think I “broke the rules” eventually or did tongue gymnastics to get it down my throat. As years went by I observed older people chewing it or poking their finger in their mouth to help it along. If only I had known……

Fasting requirements were a challenge for one who loved her food!  It was good to go to an early Mass so you could get home to breakfast. Gradually it changed from fasting from midnight to one hour of fasting.  I still struggled with the time frame.

My father changed religions from Anglican to Catholic when marrying my mother. He made his first communion on their wedding day.  He had to do the required fasting from midnight  until after their wedding ceremony which was at 11a.m.  On the way to photos Dad asked the driver for the parcel he had entrusted him with. Mum excitedly thought she was in for a lovely wedding gift. But no! Dad’s mother had packed him some sandwiches as she knew he would be starving.

The changes to Church Law have now made legal what was already happening. Women are able to distribute Communion.

Confirmation happened when I was about 12.  We had the usual preparation during Religion classes about the commitment we were making to the church.  There was an additional option to “take the pledge”.This meant becoming a Pioneer and I thought it was a good idea.  As a Young Pioneer I would pledge not to have alcohol until I was 21. I was probably influenced by the amount of alcohol I had seen being consumed at the many fabulous family gatherings. Being of Irish descent a few drinks and plenty of music were always involved.  Looking back I don’t know what possessed me.

This caused much concern in my family as it was felt it would be difficult to adhere to.  Extended family were called in to try and talk me out of it. They all held their breath at the moment in the ceremony where those who chose to “take the pledge” had to stand up. I remained seated and no more was said about this.  Intriguingly I don’t recall anyone else of the 30 or so young people taking the pledge. I often wondered if they had similar conversations in their homes

I married a Catholic man in the Catholic Church and we remained married until he passed. In preparation for the wedding we were to attend a couple of sessions with the priest preparing for our future together.  At the first one he said we were both from good Catholic families and needed no further instruction. Most of the time was spent discussing my father in law’s race horses.

Neither of my sons married “in the church” despite catholic educations.  I have long since retired as an active church going catholic so understand their decisions.

I must say I flirted with the idea of becoming a nun, the closest I could get to the Sacrament of Holy Orders. When at boarding school religion was a big part of our daily routine.  In the first year, when I was 13,  my bed cubicle was right next to the supervising nun’s small room in our dormitory. I became fascinated by her life and the life of the novices who came to train at the convent attached to our boarding house.

At the time nuns were given saints names and could only retain their own name if it was a saint’s name.  I wasn’t aware of a Saint Dianne so I started calling myself Anne, rather covertly.  One year I entered the Performing Arts Society holiday competitions in my home town as Anne. I was very good at reciting poems and prose and won a scholarship for tuition for the following year.  Unfortunately my speech teacher was not impressed they had misspelt my name when informing her of the scholarship. Oops, she couldn’t understand how I could fill out the form incorrectly! I reverted to my original name after that.

Both my parents were ill for some time before they passed so a priest visited and prayers offered for their spiritual journey ahead.  Last Rites meant you were on your death bed so it wasn’t always nice to have it happen when you were fully conscious.

At some stage during my life this sacrament’s name changed from Last Rites to the more euphamestic Annointing of the Sick. This was administered to very ill people without the need for death to be imminent.

My husband, who died from cancer, was in early stages of treatment and expected to have a few more months to live yet.   It was one of the few times in his life he was optimistic about the future.  Although he no longer attended Mass he was still strong in his faith. Imagine his response when a visiting clergy arrived in his workshop at home and briefly passed the time of day before suggesting he was there to prepare him for the next life. The response shocked the priest – he was told to fxxxx off out of there and never to return.  I was left to deal with the priest when organizing the funeral a short time later.

Although I often varied the sacraments to suit I am confident I will still achieve salvation as I was full of good intentions.

Changes to Church Law can be positive if they include more involvement by women as they bring a more flexible approach to so many things! 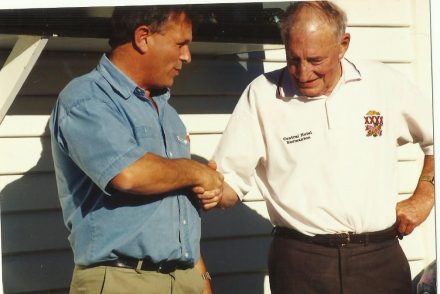 Tea & Spirituality-what did we achieve during Covid